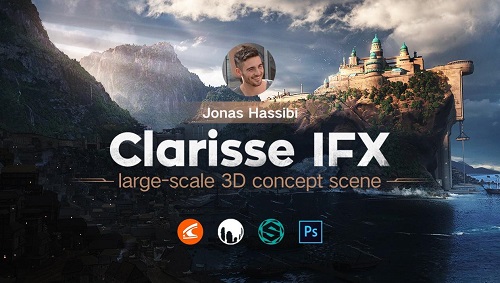 Wingfox - Clarisse IFX 3D Large Scale Concept Art Creation (2022) with Jonas Hassibi
English | Tutorial | Size: 5.2GB
Clarisse IFX is one of the most popular software used in Hollywood film production, which is featured in the independent CPU rendering system. Large CG scenes for film like Pacific Rim, The Avengers, Aquaman are created by the aid of Clarisse IFX. Clarisse stands out for the large-scale CG scene creation, plus the unique memory optimization which assists our CG artist to easily accomplish the editing for hundreds of millions of high poly models at once, hence it's a highly effective tool! In this tutorial, you will be guided through a large-scale 3D scene creation and exposed to its production workflow. The case study is emphasized on the creation of a medieval city, named Andor. As you go along the tutorial, you will learn about the methodology by the senior artist on how he creates the frame, design and draft the scene. Through the demonstration, you will learn how to create your own medieval city by using complex 3D software, and layout your scene in Photoshop, also paint and optimize your scene. It is time for you to grasp those techniques you needed to create your own medieval city! Let's get started!