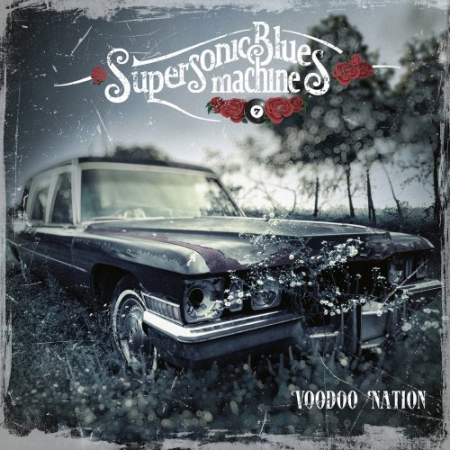 Voodoo Nation is the band's third studio album and fourth in total following West of Flushing, South of Frisco (2016), Californisoul (2017), live album Road Chronicles: Live (2019).
The album starts with the track "Money", which is about greed. "Greed alone is not the problem, it's greed and the lack of respect for everybody else", producer Fabrizio Grossi explains. The 8-minute "Devil at the Doorstep" features Eric Gales whose own recent album Crown was a #1 Blues Billboard hit. The song is a studio representation of what happens when they play live with Gales.
SSBM underline problems faced by musicians on "Coming Thru" and "Get It Done" - the latter features Los Angeles based virtuoso Josh Smith. "Do It Again" is another firecracker that rounds off the theme and features Ana Popovic, which is about "the happiness and blessing of being able to do what you love."
Young Harlem blues-sensation King Solomon Hicks takes on lead vocals and guitar on the call to arms "You and Me." The bands trademark soulful blues sound can be heard beautifully on "I Will Let It Go," featuring Kirk Fletcher, and the sumptuous "Is It All" featuring the legendary Joe Louis Walker, which sees him and Kris Barras trade vocals on the stunning soul ballad. The title track locks in the feeling of general discontent in society.
Supersonic Blues Machine reflect how they see the world through their lens and never far is a message of hope and the album closes with the inspirational country blues "All Our Love" featuring Blackberry Smoke's Charlie Starr.
Tracklist
1. Money (3:42)
2. Too Late (3:27)
3. Coming Thru (5:33)
4. You And Me (5:50)
5. Get It Done (3:54)
6. 8 Ball Lucy (5:33)
7. Devil At The Doorstep (7:59)
8. Is It All (5:14)
9. Do It Again (3:16)
10. I Will Let Go (5:22)
11. Voodoo Nation (6:59)
12. All Our Love (4:30)